The Life and Death of Charles Williams

The Life and Death of Charles Williams

Charles Williams (1942–1998) was born in Blue Diamond, Ky., a place he described as a “little old country hick town in coal mining territory, eight miles from Hazard, Kentucky, back up in the hollow where the blacks lived.” As a child, Williams taught himself to draw by copying comic book figures like Superman, Dick Tracy and Captain Marvel but never finished high school. In the early 1960s, he enrolled at the Breckinridge Job Corps Center in Morganfield to learn practical job skills. Williams seems to have thrived in the program, in which he honed his writing proficiency, made photographs and, even, developed his first regular comic strip, titled JC of the Job Corps, which appeared weekly on the back page of the Breckinridge Bugle—the camp newspaper. The comic recounts the adventures of teenagers enrolled in the program, led by JC, who face monsters, mummies and the nefarious Dr. Killpatient, and addressed the more immediate problems of finding a job, voting rights and economic opportunity. Williams graduated from the Job Corps program in 1967 “with flying colors” but was unable to find the kind of employment he wanted and ended up in the cleaning services of the IBM corporation in Lexington.

While working as a full-time janitor, Williams continued to develop his artistic practice. He created comic narratives, including the Amazing Spectacular Captain Soul Superstar, a caped superhero who fights against the perpetrators of the intergalactic slave trade and an entire mini-series called the Cosmic Giggles, which recounts the experiences of aliens visiting Earth. During their interstellar travels, the aliens observe racism, venereal disease, economic inequality and other problems specific to our planet; they ultimately decide to leave because of “pollution problems, gas shortage, bad weather, and the rent going up.” Facing these circumstances, the Martians can’t afford to stay, and they go home, avoiding a potential war of the worlds.

Beyond comics, Williams maintained an elaborate yard show, painting the trees around his house and embellishing them with cutouts of Mighty Mouse, Batman and others. In his own words, “I got me this place here and decided to do something with it. I have always had art on my mind and wanted to do something out front there that I hadn’t heard of no other person doing. I fixed up the trees to give them some new life, some color, one idea got another idea and so on down the line, each idea kept building into another idea.” Williams also made hundreds of pencil holders, sculptures of all sizes and forms, with holes drilled to accommodate all sorts of writing instruments, mostly gleaned from the desk drawers of IBM employees after they had gone home for the day. Williams describes his pencil holders: “Plastic melts off the machine and it takes certain forms when it hits the floor. It becomes solid with weird shapes. I put them on a stand and paint it, keep it in its unique weird stage, and some of them forms looks like an animal’s brain. Makes you think of a brain.”

Williams worked avidly on paintings, drawings, assemblages, sculptures and furniture until his untimely death in 1998, the result of AIDS-related complications and starvation. A few months later, an organization called A Moveable Feast Lexington was founded in his honor and tasked itself with providing hot meals to people living with HIV/AIDS in the region. In death, Williams had finally become a catalyst for the kind of change he had advocated for in his comics, drawings and sculptures, but his work remains almost completely unknown. The Life and Death of Charles Williams is the first major solo exhibition of his work and features objects made between the early 1960s–1998, initially appearing at the Atlanta Contemporary in 2020.

Phillip March Jones is a curator, artist and writer based in New York City. In 2009, Jones founded Institute 193, a non-profit contemporary art space and publisher in Lexington, Ky. He later served as the inaugural director of the Souls Grown Deep Foundation (Atlanta), director of the Galerie Christian Berst (New York/Paris) and Andrew Edlin Gallery (New York). In 2020, Jones founded MARCH, a public benefit corporation and gallery dedicated to amplifying the voices of under-recognized artists in Manhattan’s East Village neighborhood. His photographs and writings have been published by the Jargon Society, Yale University Press, Vanderbilt University Press, Dust-to-Digital, Poem 88 and Parker Gallery, among others.

The accompanying publication, Cosmic Giggles by Charles Williams published by Institute 193, will be available at the Intuit Store during the exhibition.

Tour The Life and Death of Charles Williams from your device! To navigate the space, you can use the arrows on your keyboard or click the circles on the floor and drag your cursor to reposition. To read labels and see a work of art up close, click on the blue and teal pins; click the URL in the pop-up to open the file in another window.

View photos from The Life and Death of Charles Williams on Flickr. 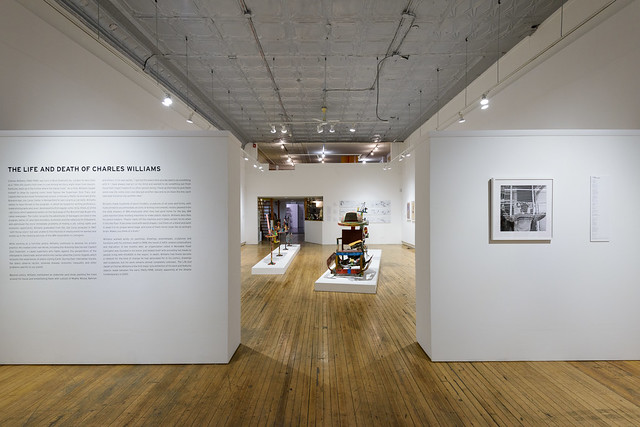