Roman Villarreal captures the spirit of South Chicago in his art, reflecting the people, places and life experiences of his community. The artist’s first major retrospective, Intuit’s exhibition spans decades of his artistic practice, featuring works from the 1970s to the present day. A self-taught sculptor and painter, Villarreal tackles complex subjects through creative experimentation in a diversity of media. Frequent subjects range from urban tragedy and commemoration to family life and celebration to exploration of his Mexican heritage.

Villarreal’s mastery of materials—alabaster, marble, limestone, serpentine, acrylic—has resulted in several public commissions, notably Tribute to the Past (2015) at Steelworkers Park in Chicago’s southeast side. His public works may be found throughout the city of Chicago.

Villarreal (b. 1950) grew up the second of six children in The Bush neighborhood of South Chicago—across from the steel mills. Throughout his youth, Villarreal traveled between Chicago; Tampico, Mexico; and Corpus Christi and Benavides, Texas, to be with family and attend school. In the 1960s, young Villarreal joined a gang, before serving in the military during the Vietnam War. Although interested in art since childhood, it was in training Villarreal began to draw and sell his works to fellow soldiers, a practice that encouraged him to continue in the arts.

Following his time in the military, Villarreal returned to Chicago to work in the steel mills, where he began to make small sculptures using the materials he could find. The fall of the steel mill industry led to what Villarreal has described as a “gray period.” It was then he turned to art full-time, submitting pieces to exhibitions and researching art history. Drawing inspiration from his lived experiences and what he saw, Villarreal documented the violence of the 1990s, the tragedies he witnessed in his community, while also looking towards subjects such as urban fatherhood. He presents what he sees and experiences—the good and the bad—serving as artist and visual documenter and storyteller, the personal intertwined with the place.

Tour Roman Villarreal: South Chicago Legacies from your device! To navigate the space, you can use the arrows on your keyboard or click the circles on the floor and drag your cursor to reposition. To read labels and see a work of art up close, click on the blue and teal pins; click the URL in the pop-up to open the file in another window. 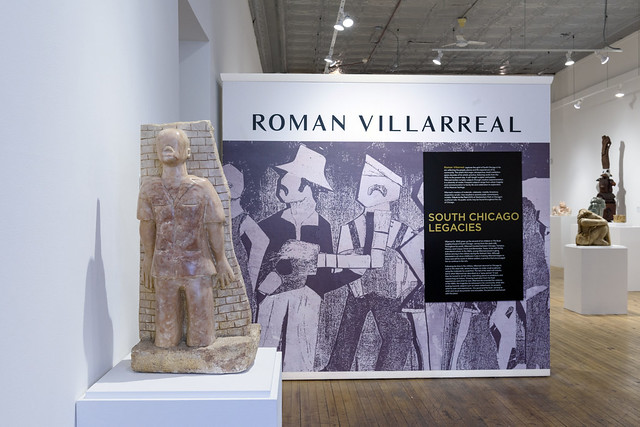 Learn more about Roman Villarreal in the article Walking in Beauty by William Swislow in the museum’s annual publication, The Outsider.

Take a self-guided tour of the 40+ works of public art—architecture, murals, sculptures—throughout Chicago’s southeast side!

Learn about the steel mill and the South Chicago community: