Pop Up: The Catalin Radios of Victor F. Keen 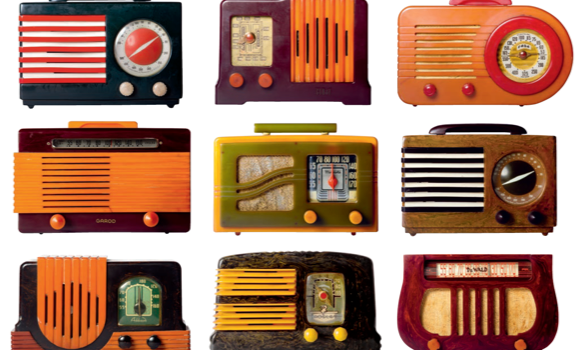 Pop Up
The Catalin Radios of Victor F. Keen

These radios are made from Catalin, the brand name for a specific resin developed in the 1930s. The American Catalin Corporation purchased the patents for the Bakelite resin casting process and importing rights to a German resin dye formula, then began to manufacture plastics in a process that improved upon the original Bakelite method, which had relied upon additives and fillers that resulted in an inferior plastic. Catalin, instead, poured resin into molds in a liquid state, eliminating fillers and additives, and cured the molds in ovens over a period of days. The results were thicker plastics, brighter colors and a smooth polished surface that may seem oily to the touch.

Dyes were mixed into the plastic resin, creating an art-like marbleized aesthetic, drawing interest from Keen. The radios were the first items to spark his collecting passion, which he began in the 1970s.

As the country emerged from the Great Depression, Americans wanted entertainment options, and industry answered with Catalin radios. Manufactured from 1928 to the ’40s, the Catalin radios were recognizable by their colorful hues and varying sizes, shapes and styles. Because of the way they were made—dyes being partially stirred into the plastic resin—a marbleized look with three-dimensional depth was achieved, resulting in no two Catalin sets having the exact same pattern. At the time of their production, the radio sets were the must-have decorative object in a household. Manufacturers recognized that style dictated purchase. The iconic Catalin Radio, like its predecessor Bakelite, whose color choices were limited to black and dark brown because of the carbon fiber or sawdust added to strengthen its structure, represent the influence of the Art Deco movement. Much of the design of this period reflect this artistic style of confident sweeping lines and thrusting angles.

Many small items, such as costume jewelry, hair barrettes, poker chips and trinket boxes were made from Catalin. Catalin’s production peaked in the decades before World War II, with production slowing during the war, followed by limited post-war production. Although Catalin was initially stronger than Bakelite, it would turn out to have long-term stability issues. Cracks were common, and many of the originally vibrant colors have faded due to oxidation and ultraviolet light exposure. Today, Catalin radios are extremely rare.