In Focus: George Widener
Selections from the Collection of Victor F. Keen

Born in Covington, Ky., in 1962, George Widener displayed mathematical prowess and exceptional memory from an early age. After encountering his first wall calendar in 1968 at his grandmother’s house, Widener began a lifelong fascination with dates, calendars and numbers, which he now transforms into complex visual imagery.

Widener joined the U.S. Air Force as a young man. After his Honorable Discharge in 1984, he attended the University of Texas at Austin to study mechanical engineering. At this time, Widener felt an onset of nervousness and a sense of isolation; he began to explore dates and draw to ease his anxieties. In 1986, he suffered a nervous breakdown. Hospitalized and diagnosed with depression, he had visions about time, which led him to more fully consider his calendar methods and to keep extensive notebooks. After his release from the hospital, he traveled around the United States and to the Netherlands; he continued to draw wherever he went.

In 2005, George Widener met gallerist Henry Boxer and shared his notebook drawings and calendar ideas for the first time. Through the exhibition of his work at the Outsider Art Fair in New York, Widener soon garnered widespread attention. Today, he exhibits globally at galleries specializing in self-taught, outsider and contemporary art. Though he is widely exhibited and collected in these circles, he no longer considers himself an outsider artist, noting that he received artistic instruction at a vocational class in 1994 and citing his awareness of the mainstream art world. Widener’s position emphasizes the questions raised in the field about the way in which artists are classified or included (or not included) in the genre of outsider and self-taught art. Intuit continues to explore these increasingly important questions about the genre and its artists.

Intuit is pleased to present this artist-focused exhibition featuring selections of his drawings and notebooks from Intuit’s collection and his large-scale multimedia works from the collection of Victor F. Keen, a prominent collector of Widener’s work. In Focus exhibits a breadth of George Widener’s oeuvre with works dating from 1999 to 2018.

Learn about George Widener and his work from the artist himself

View photos from In Focus: George Widener on Flickr. 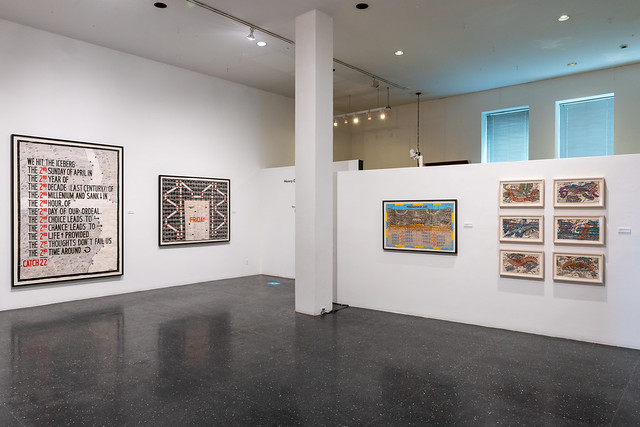