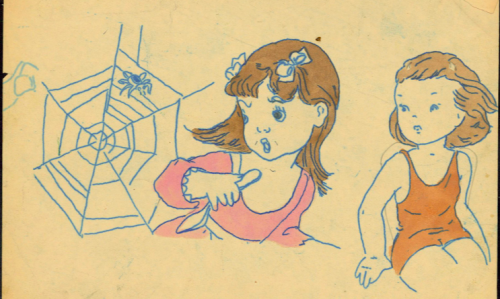 Henry Darger was a native Chicagoan who spent part of his youth consigned to an “Asylum for Feeble-Minded Children” in Lincoln, Ill. As a young adult, he returned to Chicago, where he got a job as a janitor and lived a mostly-reclusive life in a one-room apartment in the Lincoln Park neighborhood. Upon his death, Darger’s landlords discovered something incredible: a striking 15,000-page graphic novel entitled In the Realms of the Unreal. The story chronicles the seven Vivian Girls, who lead a bloody rebellion against the child slavery of the evil Glandolinean Army. In spring 2000, Intuit took possession of the contents of Darger’s living and working space, which was installed as a permanent exhibition in 2008. Intuit’s Henry Darger Room Collection includes tracings, clippings from newspapers, magazines, comic books, cartoons, children’s books, personal documents, and architectural elements, fixtures, and furnishings from Darger’s original room.

In 2017, Intuit celebrates the 125th anniversary of Henry Darger’s birth with Chicago’s Henry Darger, a yearlong series of exhibitions and programming. From its extensive collection of Darger’s source materials, Intuit has selected examples to highlight, some of which are on permanent view as part of the Henry Darger Room Collection. The use of source materials was central to Darger’s process. He carefully selected and traced images (from sources such as the coloring book pages on view)and reconfigured them to create new compositions: horns from a ram appear on his fantastical blengins, while images of young girls playing and engaging in daily activities become inspiration for the Vivian Girls and children in his narratives. The imaginative world of Wizard of Oz author L. Frank Baum, Darger’s Roman Catholic faith, the weather, and the battle scenes and regalia of the American Civil War count among the artist’s diverse influences. Compare the source materials on view in this gallery with the original art work by Darger in the nearby exhibitions.

All images from the collection of Intuit: The Center for Intuitive and Outsider Art, Henry Darger Room Collection and Archives.