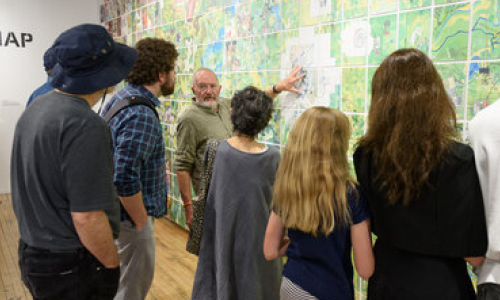 Explore the extraordinary works on view in Intuit’s current exhibition, Jerry’s Map, during a gallery talk with artist Jerry Gretzinger. The artist will discuss his interest in mapmaking, detail his unique artistic process, and explore the elements of abstraction exemplified in his collage and mixed media map panels.

Jerry’s Map (on view through January 12, 2020) features selections from the map of Jerry Gretzinger’s imaginary world. The vast project now consists of about 3,600 individual 8 x 10″ panels conjoined to make a single, large-scale map filled with cities, countryside, rivers, airports, railroads and other features representing everyday life in this imagined realm. Gretzinger paints and collages pieces of the map based on randomly-generated instructions drawn from a special deck of instruction cards.

Born in Grand Rapids, Mich., in 1942, Gretzinger studied architecture and liberal arts at the Universities of Michigan and California. He joined the Peace Corps in 1966 and spent two years in Tunisia, later returning to that country in 1968 as an architect with an archaeological team to catalog the Roman mosaics there. He came back to the United States in 1973 and started a handbag design company in New York. In 1982 he and his wife, Meg Staley, formed Staley/Gretzinger, a women’s art-to-wear company. He retired to Maple City, Mich., in 2004.