Henry Darger: The Room Revealed—Darger as Reader, Writer and Bookmaker

This exhibition is the first of three in the series Henry Darger: The Room Revealed, which draws upon the Henry Darger Room Collection and Archive to explore questions about the author and artist’s life and work. The series will culminate in the dismantling of the current Room exhibition to complete conservation assessment of fragile items and plan for a new installation. The exhibitions are intended as a means of experimenting with different ways to present information and will range from audio components to tactile objects.

To present multiple perspectives on the work, Intuit engaged Darger scholars Michael Bonesteel, Leisa Rundquist and Mary Trent to explore how its collection reveals aspects of Darger’s life. The premise of Darger as Reader, Writer and Bookmaker begins with simple questions: What did Darger write and when? What influences appear in his writing? Who are the characters? The Vivian girls, heroines of Darger’s epic 15,000-page novel—known in brief as In the Realms of the Unreal—receive special treatment through a selection of their portraits and an exploration into what influenced how they are depicted in Darger’s art work. Darger also created a number of scrapbooks, compiling sources such as newspaper articles and comic strips into this book form.

Henry Darger (1892-1973) was a Chicagoan who spent part of his youth consigned to an Asylum for Feeble-Minded Children in Lincoln, Ill. As a young adult, he returned to Chicago, got a job as a janitor and lived a mostly reclusive life in a one-room apartment. At the time of Darger’s death, his landlords discovered an extensive body of art work and writings. Central to these was the novel, In the Realms of the Unreal, accompanied by hundreds of illustrations made through a painstaking tracing process, through which he learned to draw and paint. In 2000, former landlady Kiyoko Lerner donated the contents of Darger’s living and working spaces to Intuit, which were installed in 2008. The Henry Darger Room Collection and Archive includes source materials for his illustrations (tracings, clippings from newspapers, magazines, coloring books, cartoons); architectural elements and furnishings (table, fireplace, phonograph, dresser, chandelier); and art-making supplies (paints, brushes, pencils).

Tour Darger as Reader, Writer and Bookmaker from your device! To navigate the space, you can use the arrows on your keyboard or click the circles on the floor and drag your cursor to reposition. To read labels and see a work of art up close, click on the blue and teal pins; click the URL in the pop-up to open the file in another window.

View photos from Darger as Reader, Writer and Bookmaker on Flickr. 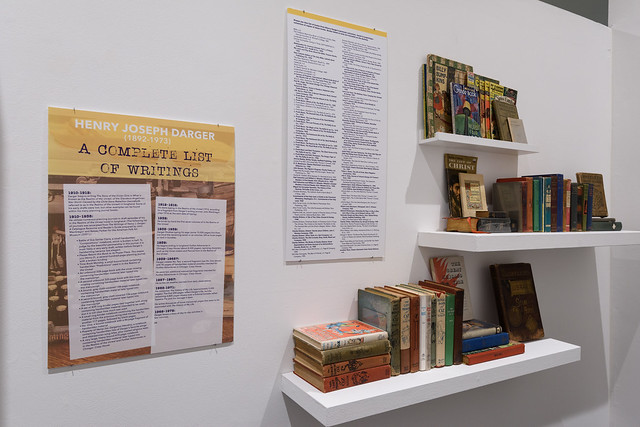 Found among the books, tracings and furnishings of Henry Darger’s one-room home studio were records. Tune in to a selection of songs from Darger’s collection along with compositions using Darger’s words, created, scored and produced by Philippe Cohen Solal with Mike Lindsay. Playlist cover photo © John Faier

In the exhibition, this playlist is accompanied by audio recordings of readings of Darger’s works by Geoffrey Carey. The songs from the album OUTSIDER and Carey’s recordings are courtesy of ¡Ya Basta! Records and Philippe Cohen Solal. Intuit thanks them for sharing these recordings. Learn more at www.outsideronline.co.

Henry Darger: The Room Revealed is funded by the Terra Foundation for American Art and supported in part by an award from the National Endowment for the Arts. 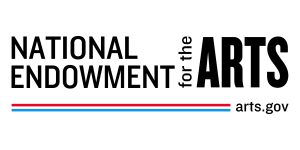