Chicago-based collector Susann Craig (1936–2021) assembled a vast collection of folk and outsider art. Excursions to find unique treasures took her all over the world, where she met interesting people, made enduring friendships, acquired art and experienced eccentric adventures. On a street corner in New Orleans, she met a woman singing spirituals who sold colorful paintings “the Lord had called upon her to make.” Returning to Chicago with a trove of Sister Gertrude Morgan’s paintings, Craig spread the word about Morgan to her fellow collectors. On a road trip through the Manistee Woods in Michigan, she came upon the polka dot-painted house of Kid Mertz, eventually filling the walls of her homes with his creations. She was an early proponent of William Dawson, whose wooden carvings became internationally renowned during the Corcoran Gallery’s 1982 traveling exhibition, Black Folk Art in America, 1930-1980.

In 1991, Craig joined a handful of Chicago art enthusiasts who came together to found Intuit: The Center for Intuitive and Outsider Art. She served on the board of directors for 29 years before being elevated to life trustee status in 2020. Craig received the museum’s highest award, the Visionary Award, in 2018. This exhibition celebrates Craig’s gifts to Intuit over the years.

Take a tour with Susann

Craig shared stories about her collection of outsider and contemporary art, including works by artists Emery Blagdon and Roger Brown, while leading a tour through her home in 2020.

View photos from Building a Legacy: Gifts from Susann Craig on Flickr. 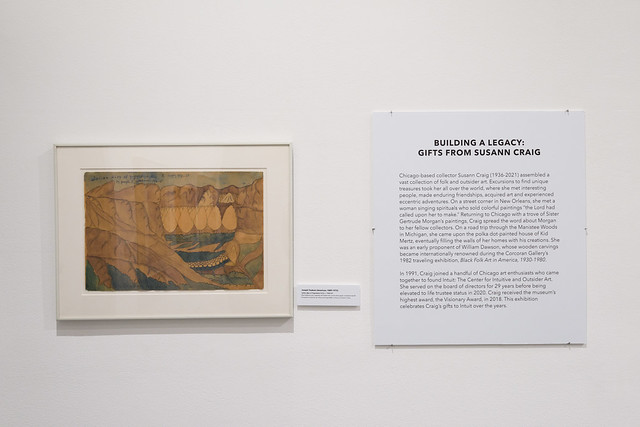